Improvements to a Pre-CGT Asset

How do I calculate CGT on the recent sale (Feb 2021) of an investment property?

Purchase of investment property as follows:

I am going to assume you are missing a zero on the land sizes and title one is 1,240sqm and title 2,520sqm. But either way the ratio should be the same so that is good more than 2/3rds of the land is pre CGT

Nice one a pre CGT asset. Basically the sale price needs to be apportioned between the two properties or 3 properties in the case of the renos being a separate asset from the pre CGT property. You would use that ratio to apportion the selling costs too. If you wanted to do it yourself you could argue that it was all just land value (I am assuming that is probably the case considering the age of the house and attractiveness of two blocks to developer) and just apportion the sale price on a Sqm basis. But this is unlikely to give you the best outcome as you want as much of those sale proceeds across to the pre 1985 property and a valuer could argue that up for you considering the house. Probably worth the tax deductible cost.

Now to the reno of the pre 1985 house. Glad it is not a rebuild as that would always be considered a separate asset and so post 1985. Renovating a pre 1985 house does not change its pre 1985 status (that is, it is not considered a major capital improvement) if the cost is under certain caps set each year. If there have been renos over the years they each get measured separately so in theory you could spend a lot of money on renos just a little at a time. So here are the caps and more info https://www.ato.gov.au/individuals/capital-gains-tax/property-and-capital-gains-tax/property-improvements-and-additions/ 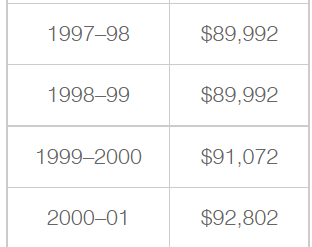 An addition or improvement, such as renovating a house, is a major capital improvement if its original cost is both:

For completeness I explain why 5% test won’t save you. If you are over the cap above the cost of the renovations has to be more than 5% of the selling price of the pre CGT property, as I only know the combined selling price I can’t answer that exactly but working backwards $95,000 x 20 = $1,900,00. So the value of the pre CGT property alone would have to be more than $1,900,000 for the renovations to be less than 5% of the selling price. And you didn’t even get that price for both. So you are not going to pass on this test. Note if you read that ATO site you will see about indexing. Yes technically the $95,000 needs to be indexed for inflation but only for the period from April 1999 to September 1999 so would be insignificant.

(a) more than the *improvement threshold for the income year in which the event happened; and

(b) more than 5% of the *capital proceeds from the event.

There are two key points here. They have to be improvements so if anything that is repairing the property to the state it was in when you bought it doesn’t count. As you purchased it 16 years earlier surely there are some of them. There is also the question of related improvements. Where they all done at the same time as part of the same project?

Not sure which way this will come out so here is the answer to both outcomes.

So if you can get those improvements under the threshold for the year they started then it is only title 2 that you need to consider for CGT. We are just looking at apportioning the sale proceeds between the two properties so that we can work out the capital gain on property 2. The lower value you can give to property 2 the better of course, you just have to have a reasonable basis.

A registered valuer is the safest way to apportion the sale proceeds. If you are selling to a developer then you could argue it was all land value only so just pro rata the sale proceeds yourself on a sqm basis. I doubt the sqm basis is going to give you the best outcome. You want to apportion some of the proceeds to the value of the house which we have now worked out is completely CGT free.

I have linked to my CGT calculator to help in the calculation of the land but it is very straight forward now that it is only title 2 alone that you need to consider. The valuers cost would be completely tax deductible as a cost of managing your tax affairs, so that does not need to go in the spreadsheet, just in your tax return where you would claim tax agent fees etc, in the year you pay the valuer. The selling costs would need to be apportioned between the two properties on the same ratio as the sale proceeds. Note the spreadsheet includes third element costs. You will not be allowed to include them in this case because the property was purchased before August 1991.

Reno is not pre CGT asset?

The CGT calculation on title 2 above would be the same but you may like to choose to apportion the sale proceeds differently. The law requires a reasonable basis. You will need to do some what if analysis on the calculator. It maybe worth considering saying that the sale proceeds are purely land value and apportion them on a sqm basis. This may end up giving a bigger share of the sale proceeds to title 2 but it would also give zero to the separate asset namely the renovations. This could mean a $95,000 capital loss that you could offset then against the capital gain you made on title 2.

Note that as the renos were acquired after August 1991 then you are entitled to include in their cost base third elements such as interest, rates, insurance, upkeep such as maintenance and repairs. But third element can only apply if you are going to make a capital gain. In other words these costs can only be used to reduce a capital gain not create a capital loss. So if the paragraph above applies, that the renos are used as a loss this is not applicable.

Now if after you do the numbers you decide that it is best to get a valuer and apportion some part of the sale proceeds to the actual building because that at least gives you part of the house as Pre CGT rather than proportionally giving more sale proceeds to title 2. Then you need to do another spreadsheet for the renos basically the original costs then hopefully add third elements until it gets down to zero gain. Sale proceeds set by the valuer and selling costs apportioned on same basis as sale proceeds.

I am glad you asked how to calculate the CGT, it shows you are ready to get into the numbers and I think it will be worth your time.